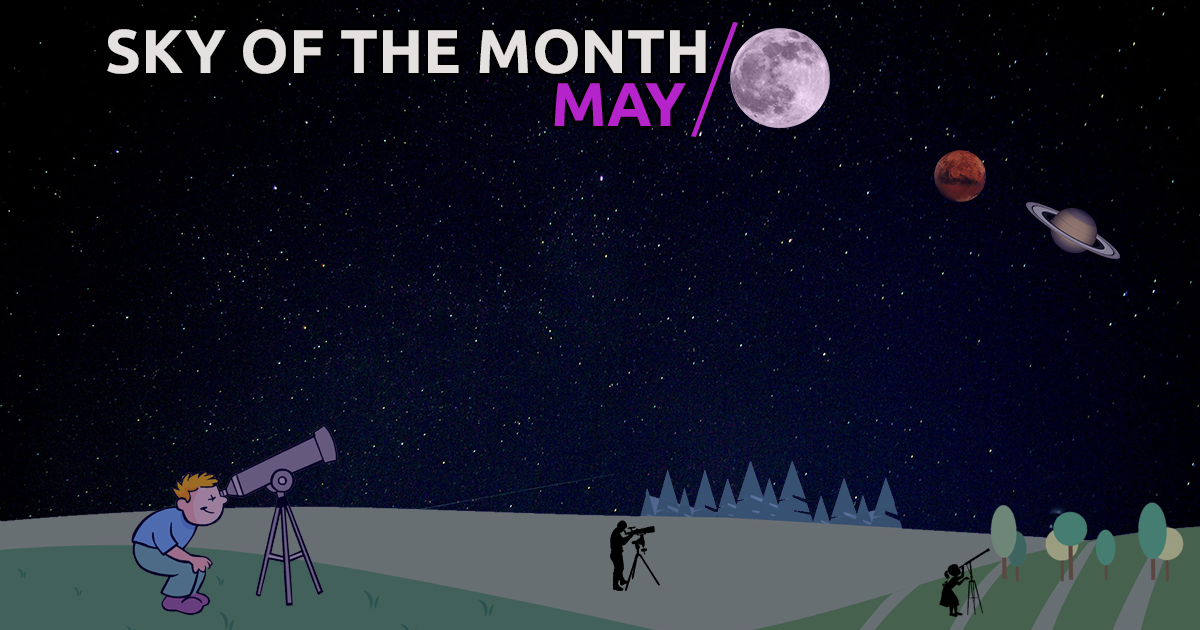 Dear friends of astronomy, May is associated with the beginning of summer, which favours our occupation with observing the sky. Through the description we have prepared, we will tour the night sky of May.

On Monday, 16/5/2022, we will have the opportunity to observe the Penumbral Lunar Eclipse in the Earth’s shadow. During the observation, we will see the Moon covered by a veil of “soft” shadow (Photo 1). The phenomenon will be observable during the morning hours, specifically starting at 04:32 and lasting until 05:36, when the Moon will set. In fact, at 05:27 the Moon will enter the Earth’s main shadow, giving us a partial lunar eclipse for a few minutes.

Fun fact: A lunar eclipse occurs when the Earth is sandwiched between the Moon and the Sun, causing its shadow to fall on the illuminated part of the Moon.

Using the Big Dipper as a guide, we can find several stars as well as constellations. It has the characteristic “pot” shape and for the month of May, it comes out in the northern sky at sunset. We extend the imaginary line that joins the two stars at the base of the “pot” and we find Polaris (Photo 1). Polaris is the only star that is always in the same position in the celestial dome as it is located directly above the Earth’s axis of rotation. Using the polar star we can orient ourselves as it shows us the direction of north.

Fun fact: Above the Earth’s rotation axis, after 12 000 thousand years, the star Vega will be found. This is because the Earth is simultaneously making a gyroscopic motion, i.e. a spinning motion, which takes 26 000 years to complete.

From the Big Dipper to Arcturus and Spica

By extending the curve formed by the handle of the pan (Alcaid, Mizar and Alioth), as shown in the figure, we are led to Arcturus (Figure 1). It is no coincidence, moreover, that the name of the star actually means “the tail of the bear”. Continuing further along the curve, we come across another bright star called Spica. Arcturus is in the constellation of Boötes while Spica is in the constellation of Virgo.

Fun fact: Arcturus is reddish in colour while Spica is blue. The different colours in the stars are due to their temperature. Thus, red stars are cooler and usually older, while blue stars are younger and warmer.

The planets in the morning sky

Around 4:30 in the morning, the planets Saturn, Mars, Venus and Jupiter are simultaneously in the night sky. Observation can be done with the naked eye as these planets are relatively easy to see in the sky. All we have to do to enjoy this scene is to look to the southwest before sunrise (see figure 2).

In this paragraph we will mention some difficult targets where a very good telescope (with a diameter of at least 150mm) and a very good sky (away from the city lights) are required in order to observe them.

A beautiful elongated spiral galaxy with a dark line in the centre. We can spot it in the constellation Virgo relatively close to the star Spica (Figure 3)

One of the most magnificent celestial targets we can see through an eyepiece. It consists of 3 spiral galaxies (M66 and M65 and NGC 3628). We can locate it in the constellation Leo (Figure 4)

Category: Sky of the Month
Leave a Reply Cancel reply